Gluten is part of our daily lives, due to the large number of foods that contain gluten that we eat every day. We do this without realizing how much gluten we are ingesting. Breads, cakes, pizza, pastas, cookies, and biscuits all contain gluten—and there are many more also. Without a doubt foods that contain gluten are among the most consumed foods all over the world. I mean, who doesn’t like pasta, right? Meanwhile a lot of people are allergic or intolerant to gluten without realizing it. Few people know what gluten really is and where it’s found. Then, what exactly is gluten? It’s the mixture of proteins that are specifically found in the formation of grains such wheat, rye, and barley. Because many foods are made from these grains, including healthy foods such as cereal bars, gluten is widely found in our food chain. Knowing that gluten is, is an important step in improving your quality of life; however, some of the symptoms of a gluten allergy or intolerance are so common that many people don’t even realize they are allergic or intolerant to gluten. Besides that, few people know the name associated with gluten intolerance, and are therefore unable to seek treatment or change their eating habits. Have you ever heard of Celiac Disease? This sickness is an autoimmune condition that affects people with hypersensitivity to gluten. Let’s learn about the ten most common symptoms related to a gluten allergy, in order to understand the best way to create a routine to avoid gluten. 1. Digestive problems Slow digestion or indigestion is one of the main symptoms of gluten intolerance and/or Celiac Disease. It’s important to be especially alert to constant flatulence, stomach pain, bloating, and diarrhea. 2. Headache One sign of possible gluten intolerance is chronic headaches, especially after eating anything with gluten in it. This is not a symptom closely linked to Celiac Disease, but it is a good indication of whether you are intolerant to gluten. Try to pay attention whether or not the pain starts after eating foods with gluten. 3. Chronic Weakness Constant fatigue, without having performed any physical exercise, is a strong indication of gluten intolerance as well as for Celiac Disease. 4. Mental Confusion Gluten intolerance can cause confusion, dizziness, and difficulty concentrating. Be aware, as these are also symptoms associated with fatigue, stress or aging. 5. Joint Pain Gluten intolerance causes inflammation in various parts of the body, especially in the joints. 6. Immune System Problems Immune system failures can be consequences of a gluten intolerance. With Celiac Disease, the clearest symptom is anemia, which also damages the immune system. 7. Depression Gluten intolerance is also harmful to people who have depression because it intensifies the symptoms of anxiety, irritability, and sudden mood swings. 8. Skin Lesions For people who have Celiac Disease, skin lesions such as rashes, eczema, psoriasis and others, are very clear symptoms of the disease. These symptoms also appear in people with a gluten intolerance, but to a lesser degree. 9. Tooth Decay When the person has a gluten intolerance, the teeth are weakened and there is a greater chance of cavities. 10. Hormonal Disorders Hormones can also be severely affected in people with an intolerance to gluten. In cases of Celiac Disease, a very rapid increase or decrease in weight may be symptomatic of estrogen levels which are out of control. So periodic hormone-level tests are very important. What to do if you have Celiac Disease and/or gluten intolerance? If you notice more than one of these symptoms in your daily routine, the first step is to pay a visit to your doctor and ask him to order multiple tests. Ask specifically for him to run the test for Celiac Disease. After diagnosis, be prepared to eliminate gluten from your daily diet. If the symptoms are extremely bothersome, you can also do a simple test: Eat a gluten-free diet for a while and check for improvement in your condition. If you feel better, just confirm the diagnosis with the doctor so you can continue your treatment. 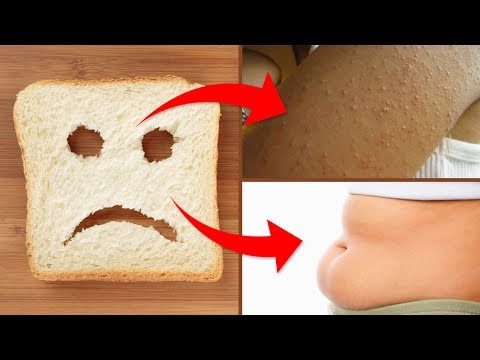 Is This The World's Longest Tongue?

How to Whiten Teeth in 2 Minutes!

7 ways to save you from a major problem

How to Remove Dark Circles Naturally in 3 Days

The Girl Who Lives In A Bowl

18 things your tongue is trying to tell about your health

7 Effective Home Remedies For Bed Bugs (GET RID OF THEM FAST!)

The Fastest and Most Effective Thin Arm Technique Ever

How to Get Thicker Eyelashes Naturally

How to protect against the coronavirus

How to Whiten Teeth in 2 Minutes!

If You Have Thin Brittle Nails, Insomnia Or Hair Loss, Start Eating This!

How to Get Thicker Eyelashes Naturally

This Drink Will Help You To Eliminate Knee And Joint Pain

7 Effective Home Remedies For Bed Bugs (GET RID OF THEM FAST!)

how to put together an outfit 101